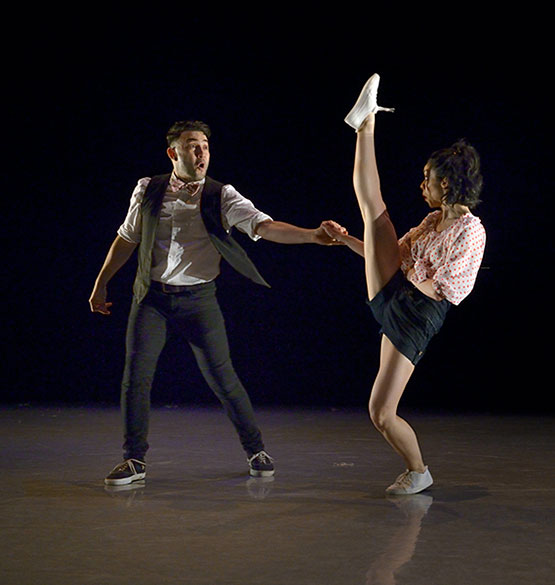 Jazz Choreography Enterprises hosted two performances of the New York Jazz Choreography Project on April 29 and 30 at the Salvatore Capezio Theater at Peridance. The performance also marked the 10th Anniversary of JCE, and following the Saturday night show there was a reception for the choreographers, dancers, and supporters of the company.

Several of the pieces had been performed for the Lenox Hill Neighborhood House show that JCE held in March.

“The Lowdown” by Jaime Shannon, was one of those, though she added some new elements to this bluesy piece for the April performance. Karin Kawamoto’s romantic musical theater duet “A Walk?” was performed then as well. The fun and very cute “Can’t Take My Eyes Off You” by Ashley Stafford was performed again. Finally, Cat Manturuk brought back “Liquid Hope” for this performance as well, livening up the program with her Mod-Hop-Jazz style.

If you want to learn more about Lenox Hill performance and some of the pieces performed there, you can read about it here.

But there were many pieces being performed as part of the Jazz Choreography Project for the first time.

The show opened with the “Men’s Medley.” Choreographed by Billy Griffin, the piece featured dancers from the Steps on Broadway Conservatory Program and was an energetic and fun number about all of the various relationship experiences women have with men.

“Falling into the Current” was a duet about homelessness. Choreographed by Gregory Kollarus, the piece was set to frenetic music and had movements to match. It was a jarring but very captivating dance.

It was one of several duets that populated the program.

Kavin T. Grant choreographed “Who Is She,” a powerful and emotional piece about the female experience.

“Trampin” was a fun duet by Kyle Weiler. It featured two Vaudeville performers who were finishing up a rehearsal but couldn’t get along. Comedic and lighthearted, the piece brought some levity to the program.

“Hypno” was created by dancers and choreographers Sharlane Conner and Bryan Menjivar. Menjivar played a hypnotist who was able to make Conner, who ran to the stage from the crowd, into a dancer. The duet was fast paced and full of lifts and acrobatics.

There was also one solo choreographed by Rachel Leigh Dolan, a sizzling piece entitled “Man’s World” for dancer Hannah Jennens.

Several ensemble performances rounded out the program and showed the diversity within jazz dance.

“All Blues” by Sue Samuels was elegant and sleek and one of the more classically jazz pieces the audience got to see.

“Tango,” choreographed by Ashley Carter and Vanessa Martínez de Baños, featured the vocals of Travis Morin. The dancers, all female, performed around him as he sang the “Moulin Rouge” version of Sting’s “Roxanne.” It showed a Latin inspired version of jazz dance.

“wisdom within our very flesh,” by Antuan Byers had a very modern feel to it. Dark and moody, the piece showed a very different side of the genre.

Ali Koinoglou’s “The Cave” was an energetic ensemble piece that closed the program. The dancers performed a lot of acrobatic flips with quick movements to capture the energy of the Mumford & Sons song they were performing to.

After the Saturday night performance, guests were able to attend a reception held at Peridance and could mingle with the JCE board members and the choreographers for the show. Artistic Director Marian Hyun introduced board members Lynne Lombardi, Kathy Gallichio, Merete Muenter, and Greg Harris to the crowd and thanked everyone, both long time and new supporters who have helped make JCE what it is today.

Follow JCE’s newsletter to learn more about its upcoming programs, and how you can help the organization continue for another 10 years.

View the photo gallery from the performance on our Facebook page.

This program of the New York Jazz Choreography Project was made possible in part with public funds from the Manhattan Community Arts Fund, supported by the New York City Department of Cultural Affairs in partnership with the City Council and administered by Lower Manhattan Cultural Council.  All of JCE’s programs are made possible in part by contributions from our corporate sponsor, Salon Ishi.