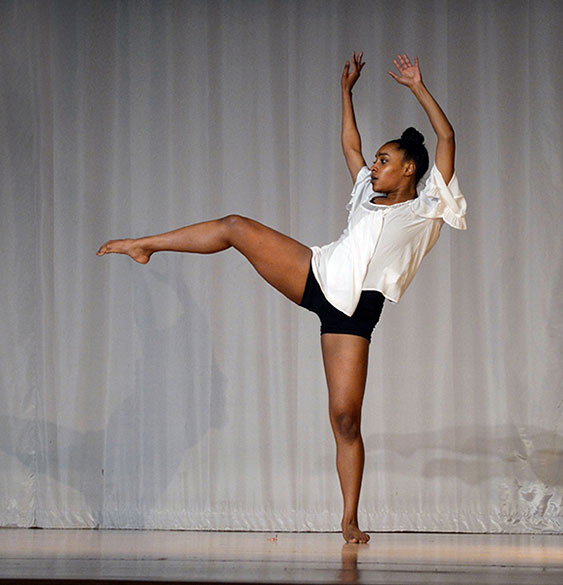 The show kicked off with Jaime Shannon’s bluesy piece “The Lowdown.” Beginning as a duet, it evolved into a larger group piece with multiple couples on the stage.

That moved into Ashley Rich’s “Strange Fruit,” a more contemporary piece with a mournful quality based on the song made famous by Billie Holiday. Later in the program another one of her pieces, “How Many Times,” was performed. This was another more contemporary jazz take, but tonally it was much different and featured fierce and strong women.

Contrasting with the modern jazz styles, there was several classic musical theater pieces. Karin Kawamoto choreographed both “A Walk?” and “Stand Close Together.” The first was a lighthearted duet about a couple in love. The second was a solo that was slower paced and more contemplative. It matched the feel of the piece’s song, which was about a young woman’s recollection of her imperfect actor father.

Jeff Davis also presented two musical theater numbers. “A Dance for Annie & Kevin” was a romantic duet. He reprised “Something Wicked…” a piece he had presented at a previous JCE performance. It tells the story of a young woman who gets caught up in an evil carnival and ends up leaving home with it.

Sue Samuels and her Jazz Roots Dance company had two pieces in the show, both of them in a classical jazz dance style. “Killer Joe/Take Five” was a piece choreographed for three dancers. It began with the three improvising solos before moving into a group piece. Samuels’ other piece, “Listen,” was a solo performed to a diva style ballad. The choreography had expansive movements to match.

“…here and now…” by Julia Halpin began with her and her dancers running out of the audience. This was part of a larger piece, and so mostly featured Halpin as a soloist, but the other dancers provided a kind of Greek Chorus feel, echoing and emphasizing some of her movements.

“Can’t Take My Eyes Off You” by Ashley Stafford was performed to the song of the same name. It’s a cute and energetic piece featuring three women obsessed with their own appearances.

Cat Manturuk closed the show with the piece “Liquid Hope.” It gave the audience a chance to see the more Hip-Hop side of jazz dance.

Following the performance there was a Q&A where audience members could ask questions of the dancers and choreographers. Below is a sampling of some of the questions and responses.

What happens with cast changes?

Between injuries to dancers and the work schedules people have to keep, the choreographers agreed that it was generally difficult to maintain the same cast for a piece.

“We have everyone in the company learn everything,” one of Sue Samuels’ dancers said of her company, explaining how they handle it.

Other choreographers don’t have that luxury and need to bring in replacements, sometimes at the last minute.

“Sometimes we step in ourselves,” Julia Halpin said.

Are any of you working on a quintessentially 21st Century technique?

Cat Manturuk considers her Mod-Hop-Jazz to fit that description, since it’s a synthesis of several different jazz related styles. She says that she’s still working on fully developing and codifying the style.

Where do you get the ideas for your movements?

“Jazz has such a strong connection to the music,” Jaime Shannon said, something she doesn’t think is necessarily true of other modern styles.

How do you remember your work as a choreographer?

This question was asked by Elena Wood, one of Sue Samuels’ dancers.

“I improv everything and record it,” Ashley Stafford said. She explained that she will sort things out later and bring more structure to the piece as it develops.

“If my muscle memory doesn’t pick it up, I throw it out,” Jaime Shannon said. She says that she doesn’t film her work while it’s being developed.

“I will perform it as a partial improv until it starts to stick,” Julia Halpin said, citing a similar process.

JCE holds an annual performance at the Lenox Hill Neighborhood House to bring the joy of jazz dance to as many people as possible. You can learn more about future performances and other events through the company’s mailing list.