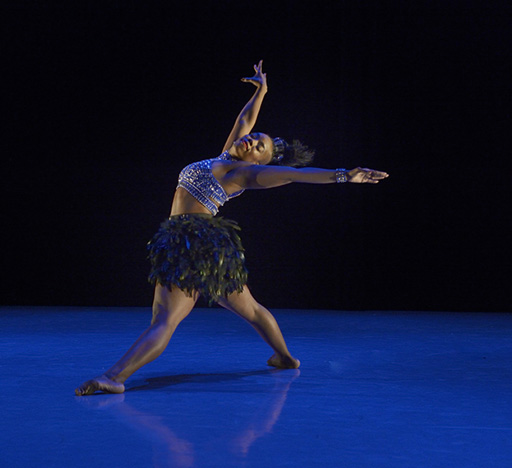 McAnally’s reminiscence of legend Bob Fosse in “Hats Off To Fosse,” brings about classical broadway jazz, with dancers posing on black chairs mimicking his famed isolated wrist and hand motifs. Weiler’s, “Sweet Tooth,” was a quintessential depiction of jazz at its earliest stages. Choreography included ‘Patting Juba’ gestures, rapid footwork, dynamic level changes and playful rhetoric showing buck, wing and jig traits. On the contrary, Morgan’s contemporary jazz work “Dress,” included aspects of popping and waving, that flowed in and out of sharp hits of the elbows and knees. Though Morgan’s combination of music and choreographic theme made pinpointing aesthetics of jazz difficult, still the work was captivating and complemented the score’s instrumental layers.

“She’s in Line,” by Gibson brought a vigorous female presence to the stage. Tribal drum beats and house sounds were led by leaps and robust arm patterns. The work exhibited both independence (with a soloist beginning and ending the piece) and unity (with dancers traveling throughout space, projecting long lines and lifted chests). Robbins, contemporary work “Please Be Kind I’m A Mess,” seemed to be a mesh of life’s uncomfortable dealings and deadpan humor. The use of suspenders served as a costume and prop, as dancers manipulated straps like strings of a marionette doll. Purposeful unsteadiness of balance and shrugged shoulders played fully to this pitiful sense of self satire.

“Path To Golden City,” by Logan, had a southern and blues charm. Dancers embodied the lyrics using fluid motion, fanning of the hands and heavy flow with limbs toward the ground. Logan’s work amplified the stage with a sense of spiritual fulfillment and soul-searching. Meanwhile, “Swift Impulse,” by Aguirre carries a cool and serene energy even during its climactic moments. There was a vast use of space, periods of stillness, yet outbursts of leaps and turns to the pre-recorded sounds of a scatting vocalist and trumpet duo.

Theatrical piece “Dancing Around the Subject,” by Sandler and Mannick, was a playful and flirtatious trio performance of cat and mouse with schoolhouse characters. The dancers timing was cohesive and their chemistry radiated the stage in moments of exaggerated expression, quirky gesture s and in your face silliness. “Something Wicked…,” by Davis, had a well-crafted storyline. The theatrical work with painted faces, props and sounds of thunder, contributed to the gothic carnival like setting. Nina Simone, ‘I Put A Spell On You,’ plays as the once frightened protagonist, dressed in pink, dances in trance. Unravelling out of a large green scarf, she begins to reveal a dark energy. Her appearance (now in a gold dress) and effort change, demonstrated a more confident presence. Davis’ choreographic direction and presentation of dancers delivered an alluring performance.

The New York Jazz Choreography Project included a spectrum of jazz dance styles. Some brought a nostalgic presence with the classics while others infused various styles to form theatrical and contemporary works. Choreographers shared clean, well-rehearsed compositions filled with theatrics, strength, technique, and abstract anecdotes. Jazz dance, conceived of personal expression and response, makes it a form that is freeing and open to interpretation, a detail quite familiar in the diversity of JCE’s jazz dance showcase.

Dominique Robinson is an American dancer, choreographer, and producer. Founder of Pizarts: Dance Hub For Entrepreneurial Innovation and Dance Gap Year, Robinson is a Jazz and Ballet teaching artist in New York, Connecticut and Argentina and is the co-founder of film dance collective dom & aston cinedans. Dominique holds a Bachelor of Fine Arts from East Carolina University and a Master of Arts in Dance Education from New York University. Her works have incorporated artists from Argentina, Brazil, Spain, Japan, Korea, Tanzania, Canada, Taiwan, Italy and the United States.