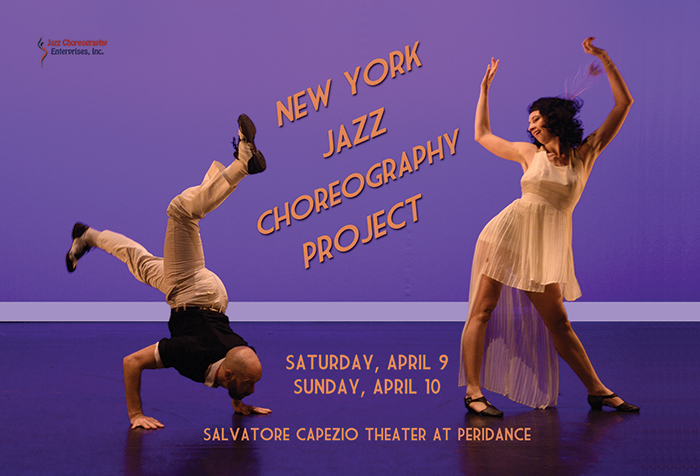 TICKETS:
$30 General and $20 for Students with valid high school or college ID.
https://peridance.ticketleap.com/

JAZZ CHOREOGRAPHY ENTERPRISES, INC. (JCE) is a nonprofit corporation formed in 2007 whose mission is to encourage the creation of jazz dance in concert form. Its goal is to present choreography in a variety of jazz styles, created and performed by people of various ages and levels of experience. To that end, they produce The New York Jazz Choreography Project twice a year. These shows give choreographers the opportunity to develop their technical skills and creativity before live audiences.

Please visit www.jazzchoreographyenterprises.org for more information on the company.

MARIAN HYUN is a founder, president, and co-Artistic Director of Jazz Choreography Enterprises, Inc. She has taught dance to peoples of all ages, from two-year-old pre-ballerinas to senior citizens jazz buffs in various New York studios and community centers. A graduate of Sarah Lawrence College, she was a freelance writer and a writing instructor at The New School before enrolling in the Dance Education Lab (DEL) at 92nd Street Y. She has performed and choreographed for the New York Jazz Choreography Project, Choreographer’s Canvas, and the Fridays at Noon Marathon at 92nd Street Y. Her first venture as a producer resulted in the sold-out performance of the New York Jazz Choreography Project in May 2007.

All of JCE’s programs are made possible in part by our corporate sponsor, Salon Ishi.