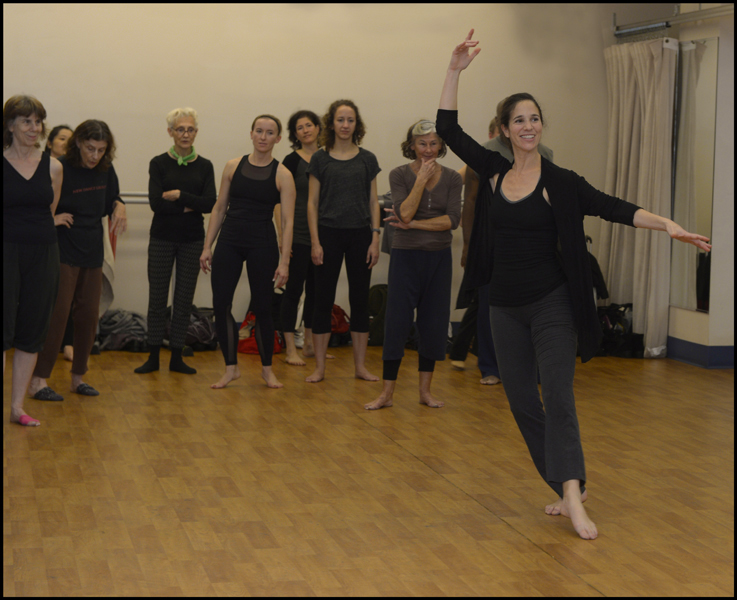 On November 6th, Jazz Choreography Enterprises teamed up with jazz dance instructor Teresa “Te” Perez Ceccon to hold a Latin Jazz dance class to benefit the people of Puerto Rico. Ceccon approached JCE about sponsoring the event, which took place at Pearl Studios and was attended by a mix of her students and some JCE followers.

Ceccon played music by Puerto Rican artists and started the class with a series of warm-up combinations based on the technique of renowned jazz teacher Lynn Simonson. Latin Jazz is one of the core influences in the Simonson technique and Ceccon, drawing on her Puerto Rican heritage, specializes in the style. Unlike some other teachers I’ve observed, she created short combinations that made the early part of the class more engaging for her students. Once everyone was warmed up, the class progressed to across-the-floor movements, getting the students ready for the combination to come.

That final combination closed the class. It featured a lot of Latin dance styles combined with more sweeping contemporary jazz movements. At several points the dancers had to maintain their timing through a few freezes where the movement ceased for several counts before starting up again suddenly.

This class was one of the first full Latin Jazz dance classes Ceccon had taught for a while, so its elements were new even for some of her dedicated students.

“Many of us who study with Te at the Gibney Dance Studios don’t have the chance to learn Latin Jazz ‘music and moves’, so this class was a real treat,” said Sheila Massey, who attended the class.

V.S. Kemanis also noted the added Latin elements as a highlight, saying, “Te is an outstanding instructor and a wonderful person. She offers an excellent, careful warmup, her directions are clear, and her choreography is exciting to dance. I really enjoyed the Latin moves! It was great to participate in a worthwhile cause while enjoying a fantastic class.”

Following the class, I was able to interview Ceccon and learn a little more about her background and her teaching philosophies.

Who were your major influences as a dancer, a choreographer, and a teacher?

When I was a child, I was pretty much influenced by anyone who dedicated themselves to dancing, no matter the genre. But I have to say that seeing Pilobolus several times at the Joyce in the 1980s as a teenager cemented my desire to dance. When I was majoring in Dance at Queens College, I took a class with Susan Matthews, that one teacher and mentor that opened my world. Besides being an exceptional choreographer, she exposed me to the Simonson Technique and, for the first time, I felt that I had found my path. In time I came to work closely with Lynn Simonson, who has taught me how to really teach dancers at any level how to dance in an anatomically aware and fulfilling way. I’m continually inspired by Lynn and devote myself to spreading her technique around the world.

What would you say are the defining elements of Latin Jazz dance and what makes it different from “standard” Jazz dance?

Both emanate from the same sources, but Latin rhythms have distinct accents that derive more closely from West Africa, such as in Afro-Cuban music. Those rhythms really call for more isolated movement and often quicker shifts of weight. You may be moving several body parts in opposition, which requires coordination and musicality. When improvising to Latin music, which is so rhythmically rich, you can’t help but be inspired by its syncopation. It is really a joy to dance to.

Other teachers we have interviewed often used warm-ups that were developed by their mentors. What does your warm-up come from? Did you develop it yourself or was there an instructor who taught it to you?

My Latin Jazz class follows the order of a Simonson class starting with a 10-minute signature set of exercises developed by Lynn Simonson. Within the structure of the class, I create my own exercises and set them to music.

I noticed that your warm-ups felt more like combinations being a bit more complex and connected than those of other teachers I’ve watched. Was that a deliberate choice on your part for your classes?

The warm-ups are meant to fully prepare dancers for more rhythmic and isolated movement. We are stretching deeply, but I can do it while introducing musicality and frankly making it feel more choreographic and artistic. Students enjoy that.

What is the one thing you would want a new student to take away from your class?

I would like any student at any level who takes my class to always feel they are expanding their awareness. That might mean that they find a deeper connection with moving rhythmically and the thrill of expressing themselves through dance. My hope is that they would feel enlivened by the mind-body connection and at the same time be inspired by the richness of Latin music and its instrumentation.

What drew you to jazz (or Latin Jazz) over other dance styles?

I’m drawn to many dance styles. For me, jazz dancing is energizing and empowering. There is a particular kind of liberation that emerges from the way I hear musical arrangements and phrasing. It’s more than just a reference to freedom of dance movement inspired. It’s an awakening. A feeling of deliverance and escape.

Do you have a different approach when teaching your students a combination as opposed to teaching dancers for a performance?

Teaching a class combination versus directing a piece of choreography can be both very similar and different. A lot depends on what kind of background the dancers have. I often like to collaborate and use the artistry that the dancers offer. I like to elicit movement from them which requires a different kind of guidance. In giving a movement phrase created for the dancers to imitate, my approach is usually identical to the way I give combinations in class with perhaps more detail and description with respect to the quality of the movement.

What is your connection to Puerto Rico, and why did you decide to hold this fundraiser?

I identify as a Nuyorican, American. Both of my parents were born in Puerto Rico and came here when they were in their teens. Although my parents were “New York Americanized”, I grew up with Puerto Rican culture and feel very connected to my roots. I have lots of family living on the island who have yet to see life restored to normal. I wanted to contribute in any way I could.

Teresa Perez Ceccon is a professional dance artist, educator and choreographer. Known by many as “Te” Perez, she specializes in Simonson Technique having earned her certification at the original Dance Space in 1997.

Jazz Choreography Enterprises sponsors dance classes in various jazz styles to promote the art form and continue to foster its growth and relevance within the dance community. To learn about any upcoming classes being offered as well as other events hosted by JCE, you can sign up for the company’s newsletter.

All proceeds from the class, along with a large number of donations from those who were unable to attend, were sent to Hispanic Federation for the UNIDOS Disaster Relief & Recovery Program to help with the rebuilding effort in Puerto Rico following the devastation of Hurricane Maria.